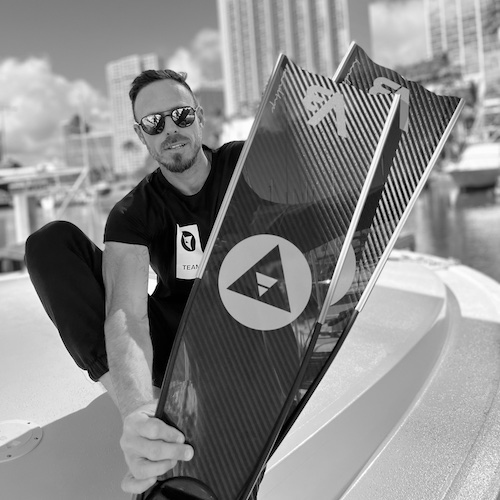 Sava is a freediver, scuba instructor, and boat captain. His romance with the ocean began when he moved to Hawaii in 2007 and began working on the water at 19 years old. One day, he watched his captain throw on a pair of long fins and disappear underwater for what seemed like an hour on one breath and resurface holding an octopus. After a few minutes of dancing with it, he let it free. Witnessing this feat captivated him and lured him into the underwater world. Each day working on and under the water since has been a chance to learn something new about boats, seamanship, knots, scuba diving, free diving, sailing, and all the fascinating intricacies of being a waterman. He sees the ocean as a chance to learn more about himself, push his limits, practice discipline, and connect with wild animals. Currently, he works on the north shore of Oahu as a captain and shark safety diver, and does private custom charters and ocean adventures. During his free time, he enjoys traveling, diving with sharks, and doing boat deliveries across oceans. Line diving plays an immense role in his diving as it sharpens his ability to perform underwater, whether he is taking photos, diving wrecks, or redirecting sharks.  As a huge fan of Alchemy, he has been wearing their high-quality gear long before being a part of Team Alchemy, he is incredibly honored to be sponsored by the best.