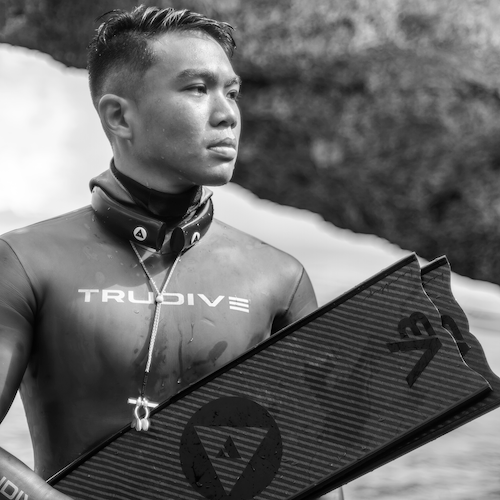 Dean Sevilleno is a Filipino speech-language pathologist by profession and a freediver by passion. He has always been a thalassophile, but it was not until he was 21 that the ocean became my second home. Before freediving, he had gratified his love for the ocean through surfing. He chased the adrenaline that came with it. He sought storms, searched for turbulent seas, and tried to tame the waves. The ocean was where he felt most at peace. Where he's from, however, he could only get waves big enough to surf every few months, so he wanted to find a sport he could do in the water all year round. In November 2020, a close friend introduced him to recreational freediving. Immediately, he knew he wanted to do more of it, and learn more about it. And he became more fascinated each time. Suddenly, he found himself doing it every week. Then eventually, a couple of times a week. In 2021, he left his full-time job to pursue the depths and regain himself. He began proper training under Pacific Blue Freediving in May 2021 and progressed from being a 15-meter diver to a 70-meter diver, all in a span of seven months. After reaching such depths, he immediately had plans to compete. In May and June 2022, he joined his first two national competitions and was able to bag three national records in the Free Immersion discipline. Freediving is not easy, it takes a lot of time and sacrifice. But he will continue to put in the work, fueled by his love for freediving and driven by these four goals: be an advocate of the sport, help build a strong community of fellow Filipino freedivers, inspire the youth to explore the beauty of the sport, and to witness everything the ocean has to offer.