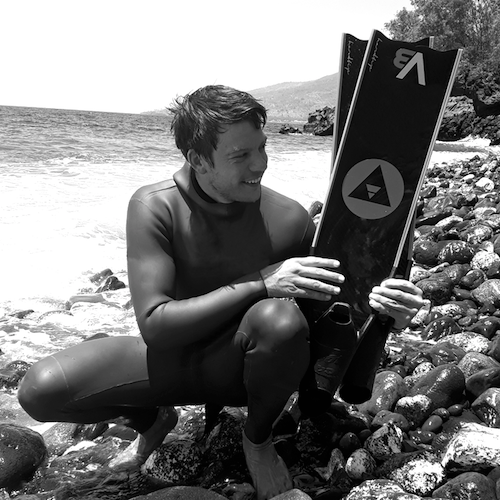 In his youth Andy was very athletic from swimming competitions to athletics; he pursued to give everything he had, to compete and to win. At the age of seven he received his first skateboard, for the next fifteen years he was glued to this plank of wood, sometimes skateboarding twelve hours a day back to back. At seventeen he went semi-pro connecting with a few sponsors. Unfortunately from there his skateboarding career went a little sideways with numerous broken bones and surgeries, braking and dislocating bones from head to toe; steel rails and concrete are unforgiving. Through these times of adversity and continual rehabilitation, the hospital is tagged as his second home. He has been put under the knife more times than you can imagine. But that is what has built him. Pain and hard times have sculpted the tough character he is today.

Through university, he searched and experimented with triathlons – Iron Man and long-distance coastal swims. He started to dabble with freediving out of pure curiosity in the deep end of an Olympic pool. BTV came naturally and he flowed with it. He was self-taught, but he was missing the knowledge aspect, he needed safety and guidance.

In 2015 Andy set off on a grand exploration to travel and film the world – leaving New Zealand and heading to the Polynesian islands, in Samoa he fell in love with the art of the Hawaiian sling and spent the majority of the sunlight floating in the pristine waters hunting fish.

After travelling dozens of countries through South East Asia and trekking across the Himalayas, he landed in Amed, Bali, where he truly discovered freediving, being taught by one of the best; Polish National record holder Emilia Biala. He fell in love with the beautiful town Amed and trained under the wing of Nicholas Kouvaras to complete his Instructor course and pursue deep diving. Then he was off to the famous Blue Hole in Dahab, Egypt. Eighteen months later he licked the bottom of the Blue Hole. From there it was back to bouncing around South East Asia from the Philippines to Thailand to Indonesia, advancing and focusing on self-improvement. Bali was where he learnt the most about himself and his training; drift diving in the strong and challenging currents. He attended and coached in multiple deep weeks with some of the best freedivers in the world through Blue Earth.