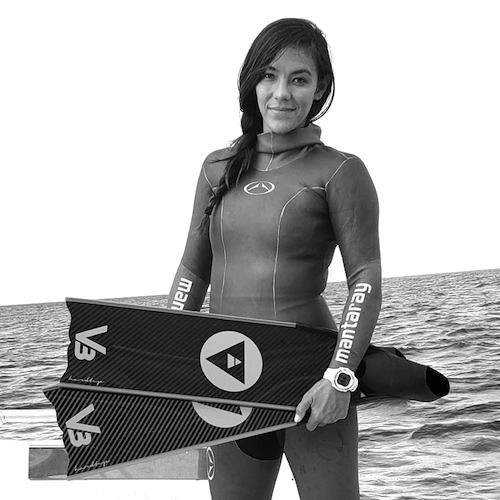 Enchante Gallardo was born and raised on Oahu, Hawaii and has grown up in and around the water since she was a young girl. She spent most of her time in the water on the surface and in the waves. She spent most of her high school years body boarding at Sandy’s a local beach break or surfing before or after school with friends. Surfing and being in the ocean was her form of therapy allowing her to be present and connected with nature. These humbling experiences taught her to respect the ocean, its soothing and calm effects, yet knowing how powerful and dangerous it can be. Discovering free diving allowed her to deepen her connection with the ocean, the world that lies beneath the surface and most importantly herself.

She took her first free diving course in September 2017 when she immediately fell in love the sport, fascinated by the underwater world and the idea of challenging her personal limits. She followed the path to becoming an instructor almost immediately. She was captivated by the idea of competing, in part to meet other like minded people who shared her same newfound passion and for the experience of becoming a better free diver and instructor. Since then she has never looked back.

In 2018, she competed in her first free diving depth competition, The Kona Depth Challenge, where she came in 2nd place. She also competed at the inaugural 2018 Hawaii Cup of Freediving and is active in the Hawaii Freediving scene. In 2019 she competed in her first international competition in Mexico at Xibalba 2019 where she achieved 4 US national records in the Constant weight Bi-fins discipline. Her success in Mexico pushed her to compete in Roatan for Caribbean Cup 2019 and CMAS World Championships as part of the US freediving team.

She currently holds the U.S. national record for Constant Weight Bi-Fins discipline, diving to a depth of 81m. Constantly inspired by the freediving community around the world, she continues to train, striving to enhance her free diving abilities and loves sharing her passion for free diving with others.