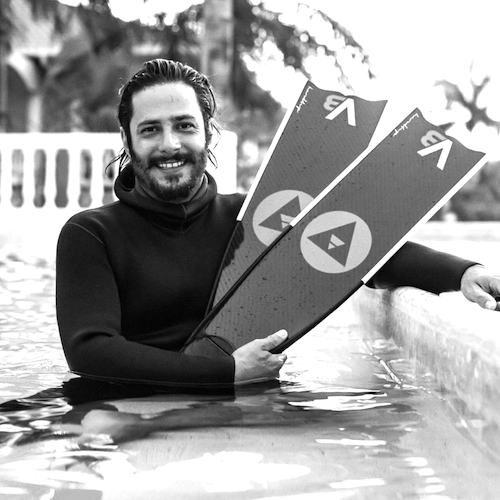 Cristian, although born in the mountains of the Colombian Andes, far from the sea, has always had a love for the ocean. He began his freediving career in Koh Tao, Thailand in 2014 and has since been teaching in some of the most recognized freediving spots around the world including Thailand, Indonesia, Philippines, Egypt, Honduras and now Colombia. Cristian holds a wealth of experience as an instructor in both AIDA (instructor trainer) and Apnea Total (master instructor), having certified and coached over 300 freedivers of all levels around the globe. His passion for freediving extends to regular training and competitions. He started competing in 2016 and has participated in over 20 international events. Highlights were the CMAS World Championship 2019 in Roatán, Honduras where he was part of the Colombian national team, which participated for the first time in such an event; as well as the CMAS World Cup 2019 in Kaş, Turkey where he won two silver and one bronze medal in CWT, CWTB and FIM respectively. Cristian has broken national records, 21 times for his country in all depth disciplines and static apnea. He is the current Colombian record holder in Free Immersion, Constant Weight and Constant Weight bi-fins for both CMAS and AIDA organizations. He’s also the deepest South American Freediver in Constant Weight bi-fins with an official record of 82 meters which he achieved in Dahab, Egypt using our V3 Alchemy fins.